“The project managers of the future will be more facilitators than experts.”

Most of us have experienced coaching in our professional lives. At one point, we want to get better, improve some of our weaknesses. It is often a painful process, which requires moving out of our comfort zone. Sometimes the coaching process works, but often it doesn’t.

About a year ago, I had the pleasure of meeting Marshall Goldsmith. Marshall is considered the number #1 executive coach in the world. He is the creator of the 360-degree feedback. Some of the top leaders in the past decades have been coached by him. 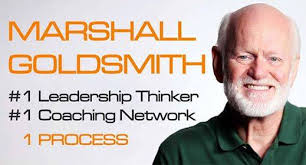 It was an honor interviewing Marshall a few days ago. I wanted to learn more about executive coaching and his very successful approach, centered around stakeholders (Marshall Goldsmith Stakeholder Centered Coaching). Was also curious to hear his views about project manage

Three highlights of the interview:

You can read the entire interview here or watch it on my Youtube channel.

Hope you learn from Marshall’s coaching approach and colourful stories.

Dr. Marshall Goldsmith was born in Valley Station, Kentucky, and received a degree in mathematical economics from Rose-Hulman Institute of Technology in Terre Haute, Indiana in 1970. He then earned an MBA from Indiana University’s Kelley School of Business in 1972, and a PhD from UCLA Anderson School of Management in Los Angeles, California in 1977.

Dr. Marshall Goldsmith is the only two-time winner of the Thinkers 50 Award for #1 Leadership Thinker in the World. He has been ranked as the #1 Executive Coach in the World and a Top Ten Business Thinker for the past eight years. Marshall is the author or editor of 36 books, including three New York Times bestsellers, that have sold over 2.5 million copies and been listed bestseller in 12 countries. His books, What Got You Here Won’t Get You There and Triggers have been recognized by Amazon.com as two of the Top 100 Leadership & Success Books Ever Written.

“My mission is simple. I want to help successful people achieve positive, lasting change in behavior; for themselves, their people, and their teams. I want to help you make your life a little better.”

Dear Marshall, many thanks for accepting to share some of your wisdom with the project management community. I am sure they will listen carefully and act on it. I promise not to take too take too much of your time, but I do want to take a lot of your wisdom 😉 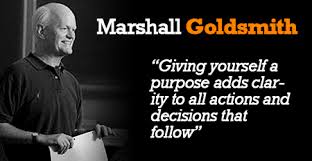 Marshall, when you were a kid did you want to become the world’s number one executive coach? How did you get there?

There was no such thing as an executive coach when I was a kid. It was not acommon term. What happened is that while I was getting my PhD at UCLA, I met a man called Dr Paul Hersey. He was giving conferences around the country. One day he was booked in two places at once.  He called and asked me if I could do one of his engagements.

I delivered a programme for the Metropolitan Life Insurance Company. They were incredibly angry when I showed up, they were expecting to see Dr. Hersey, not me.  But I got ranked first place from all the speakers!

Some months later I developed the concept of giving people 360 feedback (Note: Marshall is considered the founder of this universal coaching method).  The CEO of the company tells me: “I’ve got this kid working for me, young, smart, educated, hard-working, driven. It would be worth a fortune to me if I could turn this kid around and change his behaviour”.

I told him that maybe I could help, but he had some doubts.  I said: “I’ve got an idea, I’ll work with the kid for a year, if he gets better, you pay me, if he doesn’t get better, it’s free”.  You know what the CEO said: “sold”.

So that’s how I got into coaching.

Marshall you are also revolutionary by your unique “no cure no pay” delivery of coaching services. How did you dare to take the risk of not being paid after spending a yearlong coaching?

Well, obviously it must not be that big of a risk or I wouldn’t live in such a big house in New York 😉

But how many times you didn’t get paid?

Oh, I’d say I get paid 90+% of the time.  And when I didn’t get paid the issue was always the same. The problem was very easy for me to find, I only had to look at a mirror. It was me, I had to improve my coaching.

Do you think anybody can be coached Marshall?

Yes, but only if they want to improve. Anybody can change behaviour, but I’ll tell you when it doesn’t work. Number one, it doesn’t work with people who don’t care.  If people are not interested, coaching is a total waste of time.  Don’t try.

Number two; it only should be used for people who will be given a fair chance.  Sometimes big companies write people off, they don’t give them a fair chance. Yet they engage a coach, they pretend that that person matters, while in fact, in their minds, that person is already out.

Number three, coaching doesn’t help people that have technical problems.  For example, I got a call from a pharmaceutical company; they say we want you to coach Dr X. I ask: “what is his problem?.” They said “He’s not updated on recent medical technology”. I said: “neither am I”. I can’t make a bad doctor a good doctor, or a bad scientists a good scientist.

Next, never coach an ethics or integrity problem, fire them. How many ethics problems does it take to ruin the reputation of your company? Just one.

When does coaching work? If the issue is behavioural, if the person is willing to try, and will be a given a fair chance, this process always works.

Can you share a couple of other names that you’ve coached?

Well, some of them you have met, like Dr Jim Kim, President of the World Bank. An amazing person.

Yes, I’ve coached Alan Mulally, Dr Jim Kim, Dr John Noseworthy the Head of the Mayo Clinic, Mike Duke who was the CEO of Wal-Mart, Ian Read the CEO of Pfizer, Frances Hesselbein CEO of the Girl Scouts, and so on.

I coached a lot of wonderful people.

What is amazing is that you remain friends with some of them people you coached. How does this happen?

That is correct. Some of my best friends are people that I’ve coached in the past, like Alan Mulally. Who I haven’t coached in the last 25 years, yet, we’re still great friends.

What’s your view about projects and project management or project leadership?

Well, I’m not an expert on your field, so I’m certainly not going to tell you about project management, you’re the world’s expert on the topic as opposed to me 😉

On the other hand, I would see my coaching process as really aligned with good sound project managementmethods.

Basically if you manage the coaching engagement like a project, I tend to be a great success.

One of the bigger challenges for project managers today is stakeholder management. The number of stakeholders in some of the most strategic projects (transformation, M&A, digitalization,…) has increased exponentially. Is it possible to apply your coaching process to a project team?

Of course, the coaching process can be used to increase the project team performance. In fact, we are working on developing an approach and certification program for High-Performance Project Leadership (great for project managers to grow in their careers) and another one for Working Together as High-Performance Project Teams (especially suited for project teams to improve the interaction with stakeholders and the team engagement).

Then you get the team together and say: “Team, we are at 5.8, we wish we were at 8.7, if we could pick one behaviour that would help everybody to get better and improve our teamwork, what would it be?”.

Afterwards each person practices feedforward[1]; they go and talk to each person, they have one-on-one conversations that can occur simultaneously.

“Well, I’m working on a listening”, for example, “other than a listening, can you give me one or two areas that I can do to improve?”. Each person develops a list and picks one behaviour for himself or herself.

My good friend Alan, when I explained my coaching process, his first comment was “is this all there is to this it?”. I said “yes”.  He looked at me, he said, look I built an aeroplane and it is really complicated. If I can build an aeroplane I can certainly do this.

One last question Marshall:  Business executives tend to see project managers as very tactical people, focused on the day to day deliverables. On the other hand, the world is asking for project leadership. How can a project manager develop to become a project leader? Alan Mulally is a great example of this personal growth.

Well, you know, I’m writing my new book, it’s called Stakeholder Centred Leadership. I should get you involved in the new book.  The purpose of the book is to look at what a leader is, like Alan. Alan was not an expert, he was a facilitator, he didn’t lead through expertise, he never worked in a car company before.

He led because he was a great facilitator, he managed the process. The leader doesn’t have to be the expert; the leader can be a facilitator, who helps learning across the organisation. And more and more I think that’s what the leader is going to be, the leader, Peter Drucker said that, you know, he taught me the concept of a knowledge worker.

Leaders will have to be great facilitators.  Therefore, the project manager of the future is going to be much more a facilitator than an expert.

Can I ask you, in which projects are you working now?

My current most exciting project is called the “100 Coaches”. It is my big legacy project, with the mission to give back everything I learned to 100 fantastic people. You’ve met a lot of these people, what do you think of them?

It’s such an honour and a wonderful crowd with a common purpose to share, to do good things, to give back and pay-it-forward. I’ve never seen such level of positive energy.

Thank you for your time Marshall, it was a pleasure. You make complex things simple, a bit like Peter Drucker on Management. You do the same with Executive Coaching.

Thank you so much.

To find out more about Marshall, get in touch or receive his newsletter visit: https://www.marshallgoldsmith.com/